There's Only Shame, Not Pride, in "Gay" Parades

POLITICIANS, SEXUAL ANARCHISTS EXPOSE CHILDREN TO THE WORST OF AMERICA 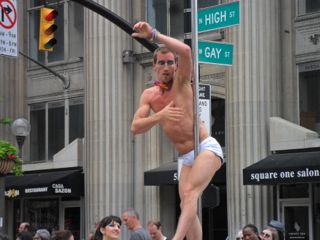 Do you believe homosexuals have anything to be “proud” of? No, I don’t either. And the sex parades our communities must endure each year are depraved displays of a new America….one you and I often don’t recognize. What can we do?

Here are a few images from the Columbus, Ohio “gay” pride parade in 2014. Children were there in record numbers, both as spectators and as participants. There was still semi-nudity and nudity. And the politicians….amazing! Democrat Ed Fitzgerald, candidate for Ohio Governor, was “proud” to be there.

So were many other Democrats including candidates for judge Jennifer Brunner, Tom Hayes, Chris Brown, William Woods, and even Republicans Valoria Hoover and Fred Nelson.

Planned Parenthood was there, advocating "all" families. Seriously? What about those who are pro-life? Who choose to not abort one of their members?

Macy's, JC Penney, Huntington Bank and many other companies had proud marching contingents. How incredibly insulting to those of us who do not favor sodomy.

The blind depravity is stunning and America needs to speak out. Our children learn nothing from "gay pride" except that sexual excess is okay, gender confusion is normal, and adults are really, really dumb.