The Cross Beats the Stolen Rainbow

Two recent court cases remind us of the power of symbols, both inspirational and commercial.

But the sweet rainbow image has been violated, raped by the deluded and fraudulent, and now serves too often as a garish signpost for slavery to grave homosexual sin.

It’s clear God did not intend for the rainbow to represent rebellion, iniquity and division. So how did this precious symbol become the banner, with few objections, for human depravity, lust, defiance, and heresy?

Rainbow flags are flown in America from some government buildings, at some of our embassies, and these colors on several occasions even lit up our White House (under the former regime, thank God). From shameful pride parades to hats, t-shirts, wristbands, and buttons sold at Target or Walmart, sexual deviance is being colorfully and arrogantly proclaimed from America’s rooftops.

We can all agree that some logos and trademarks carry enormous meaning. The mightiest logo of all time is the cross, where Christ shed His blood for the world’s sin and God transformed the tool of torturous execution --- what Satan intended for destruction and permanent humiliation---  into eternal hope for all who would believe in Jesus. 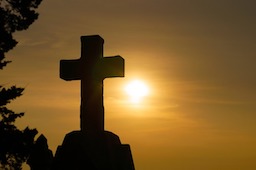 Atheists want crosses removed wherever visible, of course, believing they deserve veto power over what they ironically find offensive— God’s salvation offer to humankind. In Pensacola, a judge just ruled that a prominent public park cross must be removed, because it violates the First Amendment for some.

No, it’s doesn’t, because Congress is not involved in this local issue, as AFA’s Bryan Fischer astutely pointed out.  How long will Americans tolerate juris misprudence by black-robed fascists? U.S. district judge Roger Vinson issued his ruling reluctantly, but still bowed before court precedents that already defy the clear meaning of “Congress shall make no law…”. Carrying forward the judicial sins of the past, Judge Vinson trampled on this inspiring monument to truth and grace.

He had a choice— and made the wrong one.

Well, I’m offended by the rainbows hung all over Columbus, Ohio every June for “pride” month, as this beautiful image morphs into a brand identity for perversion. I feel excluded because the depraved have taken the Lord’s glorious sign of hope and corrupted it. Why shouldn’t I sue?

As Christians, we have that option, of course, but believers in Jesus Christ don’t always go this route because we are more secure than that, knowing that in this life or the next, every person’s knee will bow before Him, and every tongue will confess that He is Lord.

Yet millions are being misled by this wicked movement, and it’s especially heartbreaking that so many are children and teens. I wonder if perhaps it’s time for believers to claim the rainbow again, by legal means if we could.

Can we trademark the rainbow? Of course, it’s probably impossible and perhaps even inappropriate.

The rainbow stands as God’s covenant with all mankind—not just those who believe in Him now, because some of these flagrant sinners will repent, which is our constant prayer.

So maybe the rainbow couldn’t be trademarked by believers, but why wouldn’t offensive speech/symbol protection extend to crosses in public parks? If some spiritually- blinded people can’t see the beauty of the cross, but instead fear it, that is indeed their problem.

There’s no valid argument that makes such displays an “establishment” of religion. It’s a cross—not forced church attendance, not blasphemy laws, where one religion’s paranoia can enslave people for years based on a casual comment, as in Pakistan, where Christian mom Asia Bibi has been jailed for almost eight years for making a comment about Muhammed while trying to share water with Muslim women co-workers.

And leftists in this country, exemplified by the violence-inspiring Southern Poverty Law Center and Right Wing Watch,  believe that any critique or accountability of a repressive, intolerant faith—Islam-- is a horrendous act of “phobia.” But tearing down crosses for the Lord who would forgive them all and show them His bountiful mercy—now that’s a cause worth fighting for.

Is Satan clever or what? He has countless people in this country doing his bidding, failing to understand they are preppers for the pit of hell.

Their Savior—if they would recognize Him-- is the real author of the rainbow for His original life-affirming, godly purposes.

Its current misuse needs to end. Rainbows should accompany what God would smile on. God is not smiling on homosexual conduct, gender defiance or the corruption of children, and He never will.

An appropriate rainbow for the “LGBTQ” sin identity front would look very different, featuring colors like brown, puce, mauve, gray and black—lots and lots of black.

The rainbow’s current use by sexual anarchists turns hope into a license for sin. Rainbow-adorned clergy? You are in for some hot eternal times, unless repentance comes along soon.

Gyrating, Speedo-wearing sado-masochists on rainbow-decorated “pride” floats? Look out for what’s coming, unless you bow before the King of Kings.

McDonald’s selling French fries in rainbow containers, and Amazon peddling an array of rainbow “pride month” apparel? There will be an accounting, do not doubt this.

Little children understand the goodness of the rainbow. The rest of us should follow suit.