Is the NEA's Stranglehold on our Kids Ending?

They’re ba-a-ack. The NEA (National Education Association) just held its annual meeting with policy actions that once again border on sedition and lunacy. 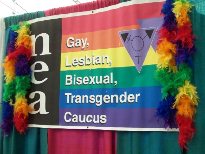 The powerful far-left NEA is likely to lose at least 10% or more of its members as teachers no longer have to fork over fees to the union to get a job, and thereby financially support Democratic Party candidates as well as anti-life and anti-family issues.

The decision is a huge win for First Amendment lovers, conservatives, and non-radical teachers, those who mostly remained silent in recent years as “LGBTQ” and pro-abortion agendas tyrannized many public schools.

The NEA muscle is one of the biggest reasons for this corruption of truth. Maybe the unions’ dominance will lessen as its bloated coffers experience a long-overdue diet.

Why monitor the NEA? Simple. It’s not only the nation’s largest union, it’s the second most powerful influence on our nation’s schools.

The first remains our protective and merciful Almighty God. But He gives us humans the freedom to dictate the terms of our children’s moral, intellectual and spiritual surrender via America’s disastrous public schools—or not.

Will concerned parents and teachers speak up and say no to evil and deception?

At its recent annual meeting in Minneapolis, NEA delegates – who tend to be the most radical of the radicals in local schools—were mostly following the leading of another, adversarial god. The union passed a slew of outrageous policies on top of the child-endangering measures of past years.

All the predictable far-left elements gathered, including huge one-sided demonstrations yelling for open immigration and abolition of ICE, with inane signs like “No one is illegal.” The union passed a measure to promote a “Black Lives Matter” week of action in our schools this year, so get ready for your kids to come home spouting “Cops are pigs” propaganda.

The union’s president, Lily Eskelsen Garcia, who proudly spoke in 2015 about her homosexual son’s relationship with another man, yielded the stage this year to sudden celebrity gun control activist David Hogg, student survivor of the Parkland school shooting.

The union also gave the President’s Award to Colin Kaepernick. Where does NEA radicalism come from? Quite a bit from the state of California, whose delegates submitted the bulk of far-out resolutions, as noted by NEA watchdog, EIA.

And the “Human and Civil Rights Award” went to Chris Sgro of North Carolina, a homosexual activist who opposed the state’s HB2, which tried to curb runaway “LGBT” demands like open bathrooms. Chris just joined the national Human Rights Campaign.

Why don’t we just state the obvious? NEA is a “gay” activist group with a stranglehold on schools. Yet maybe, praise God, that is coming to an end.

But the bitter union is officially in revenge mode.

One measure (NBI 36) authorizes NEA to publicize and identify any Christian businesses“committed to refusing services to same-sex couples and/or LGBTQ+ individuals.” It’s a blacklist.

And their sources for this potentially harmful information? ThinkProgress, the Southern Poverty Law Center and the Human Rights Campaign.

And NBI 121 stated this: “Using existing resources, NEA will release a public statement in opposition to conversion therapy, repairative [sic] therapy, reorientation, or any other process to alter a student’s orientation or identity.”

Come on. If you are an “educator” who can’t even spell “reparative,” maybe you’ve missed some other key facts about this issue.

One observer in attendance, who wants to remain anonymous, made this observation about the “stacked deck” on the therapy ban issue: “While NEA, to its credit, has relentlessly enforced Roberts Rules of Order, NEA president Lily Eskelsen Garcia caught on that the RRO process was being sabotaged, but she went along with the ploy. Normally, delegates are taken in the order of one speaker ‘for’ and one speaker ‘against.’ That was not the case here. One person who called in to submit an argument ‘against,’ in fact spoke ‘for,’ and when Eskelsen Garcia caught the error, she said, ‘Oh, but that’s okay.’

“Then a third person submitted an ‘against’ position to speak to NBI 121, but he simply said, ‘I’m against it.’ Eskelsen Garcia said, ‘No reason?’ And then she passed it off with, ‘Oh, I’m beginning to figure this out.’ When a delegate got up and asked if she could close debate, Garcia said, ‘Yes,’ so in essence, no one spoke against NBI 121, though at least one conservative delegate had submitted her slip of paper and stood at a microphone prepared to do so. It was a slap in the face of the democratic process.”

The union is very open about its long partnership with GLSEN, the Gay, Lesbian and Straight Education Network, and with the Human Rights Campaign and its corrupting “Welcoming Schools” grade school “LGBT” curriculum, featured at an NEA exhibit booth.

Yes, these “educators” are totally fine with seven-year-olds who identify as homosexual, or who are tragically confused about gender.

Then, the union passed Item 32, urging more publicity for a page on the Centers for Disease Control (CDC) website that masquerades as a “resource” for “LGBTQ youth.” The radical groups GLSEN and Advocates for Youth are listed.

This site (https://www.cdc.gov/lgbthealth/youth-resources.htm) is deceptive and potentially harmful to kids. It’s so inappropriate (and probably a holdover from the Obama administration) that I emailed the White House, asking for its removal.

And just think how many conservative, Christian teachers have been forced to go along with all this, knowing how devastating the unions’ actions can be in the lives of children who are misled into sin and high-risk behavior.

But hopefully, the NEA slaves are about to be set free.