Is 4-H Next Victim of 'LGBT' Child Assault? 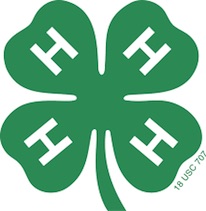 As a former member of 4-H, I am outraged.

Around 6.5 million American kids, mostly in small towns and rural areas, participate in 4-H, so gobbling up this organization would be a very tasty dish for the obese monster of sexual evil.

Conservative values? Rural America? It doesn’t get any better than this for the

all-pervasive child corruption agenda. These activists have already made tentative inroads into the world of 4-H on a state by state basis, but the latest incidents signal a full-frontal assault.

In its ties to the U.S. Department of Agriculture, the 4-H community is influenced by that federal agency. Recently, the USDA posted and then quickly removed a document that hints at a looming national requirement to force open homosexual and gender-bending expression in local chapters.

In state after state, local 4-H groups are being pressured to bow before the values of sexual perversion, as leader trainings and the university extension programs tied to 4-H install new “inclusion” programs and policies to push sexual deviance. Many state 4-H programs recently added “non-discrimination” policies based on “sexual orientation” and “gender identity.”

At Ohio State, an “LGBTQ 4-H” program for middle and high school students will be held April 28, preceded by an adult “professional development” day on April 27.

WND recently revealed the latest pressure being exerted in Idaho and Iowa. After contacting the USDA, WND was told that:“4-H is controlled at the local level and NIFA [National Institute of Food and Agriculture] would not dictate policy on the national level.” And referring to a pro-“gay” document discovered on the USDA site, the spokesman said: “This [document] should not have been disseminated to make it appear that it was national policy.”

That radical pro-“LGBTQ” policy document— called “guidance”-- had been posted and then mysteriously disappeared from the USDA website.

But despite denials, the beat goes on. Leader training is occurring in Idaho, Ohio and elsewhere. Local chapter heads fear they will be coerced in the near future.

In Iowa, activists are setting the table for full implementation --
“Inclusion of All Gender Identities”—which means pronoun tyranny, open bathrooms and bunk invasion at camp. They claim this will prepare kids to reach their full potential. Right.

An Iowa activist pushing this agenda prepared a webcast last year on “LGBT” inclusion for the national 4-H audience.

These harmful behaviors are also being pushed in Oregon, Nebraska, Colorado, California, and many other states.

This assault is deeply troubling to me. At a point in my grade school life when my father was in the final months of terminal cancer, 4-H was a huge blessing to me. My mom toiled long hours as a secretary and spent most of her spare time at the hospital with my dad.

It was a very stressful time for a ten-year-old child. As a diversion, I tackled cooking, sewing and gardening projects through 4-H that year and looked forward to 4-H summer camp.

My father passed away in the spring, yet six weeks later, I did go ahead and attend camp. My family thought it would be a positive experience for me. I will never forget 4-H and what it meant to me that year.

Camp was wonderful, wholesome, fun and educational. If serious mental illness had been present in another camper—for instance, in a boy posing as a girl in our cabin—that week would have been memorable for a totally different reason. I and my girl cabin-mates would have been traumatized. Having just lost a parent, that would have been an experience I definitely did not need.

And any boy with such a disorder does not need to be affirmed in this delusion, either. Nor does the girl who claims to be a lesbian. Even if the minor child seems eager to explore these perversions, to encourage such behavior violates the adult’s responsibility to protect children from harm.

But the sensitivities and feelings of vulnerable kids as well as their peers are disposable in the “LGBT” advocacy world. All that matters is that wicked or clueless adults have access to seriously confused children (who are often sexual abuse victims).

Yet rational policy is held hostage by threats of self-harm. If a troubled boy or girl attempts suicide, it’s the fault of the organization that didn’t force the usage of alternate pronouns. Or didn’t allow girls to take showers with boys. When will we stop being manipulated and use sound judgment?

4-H should never promote perversion to kids or allow it among leaders.

But progressive activists are relentlessly self-interested and have one goal—to weave a degrading fantasy, even if it involves innocent bystander children, in the pretense that this is a “help.”

Seeking biology-based counseling is in the best interests of confused children but seldom considered. When it is, parents can be stripped of their parental rights, as in a recent Cincinnati case. And in some states, such counseling is now illegal.

Counseling that conveys the truth about homosexual/transgender behavior will soon be illegal for adults in California unless voters stop the radicals in the California Assembly.

Let’s face it. Progressive activist groups and doctors DO NOT CARE about the majority of children or even a particular child as they ignore facts and advocate experimental deviance for children.

I just wrote the White House an email, and I suggest you take this opportunity to do the same. Federal agencies use so-called “non-discrimination” policies on “sexual orientation” and “gender identity” — none of which have been passed by Congress— to influence children in youth organizations and youth settings. These unlawful policies should be scrapped, and specifically right now, the USDA must stop forcing this unlawful policy on local chapters of 4-H.

And if you’d like to provide input into the Iowa state implementation of such harmful policies, read the proposal here, then go to this link to provide input. Do so this week before the deadline of April 13.

The only way to stop this evil is to act decisively. Let’s keep the 4-H pledge, particularly the part about “clearer thinking.”

And in doing so, perhaps we can prevent these kids from becoming the latest victims of perversion promotion in America.